Do you know that you might get a lawsuit if you make a Dark N Stormy using dark rum other than Gosling's? Actually, the registered patent for the cocktail is Dark ‘N Stormy in the late 1970s. However, the company is explicit that anyone can mix any dark rum with ginger beer and lime but give it a different name.

This drink is called the world’s most litigious cocktail. Gosling’s have filed numerous infringement cases of using Gosling’s Black Seal Rum with other ginger beer brands or any dark rum and ginger beer to make Dark ‘N Stormy. Picaroons Dark and Stormy Night Beer were even taken off the market in September 2017 for this same reason, despite being in production for 11 years.
Disclaimer: This article is a roundup of all Dark N Stormy versions on the internet. There is no intention to infringe the trademark of any kind. Zubrowka has a bit of a reputation after it was banned in the US due to its coumarin content, the very same toxic element found in tonka beans. However, to continue marketing it, the makers made a coumarin-free version. The blade of bison grass in the bottle identifies the liqueur at sight.

Here, it is mixed with Blackstrap rum made from blackstrap molasses. The combination of the 4 different flavors makes this cocktail a perfect substitute for the classic Dark N Stormy. Another cocktail having the name of the perfect storm is made with Kraken rum and extra spicy ginger beer with a hash of lime juice and aromas of mint. This one does not call for layering, instead, this cocktail is stirred. A Dark and Stormy version with Shiraz thrown in? Color me impressed! Adding rhubarb bitters to the Dark and Stormy is one way to add character and distinction to this classic cocktail. Using spiced rum with hints of vanilla and nutmeg with notes of orange and raisin makes this version of Dark and Stormy a favorite. Introduce a new flavor to Dark & Stormy by adding pineapple juice and orange bitters. So easy to make, just pour everything in. No need to stir. Add a taste of Jamaica to the classic Dark and Stormy by topping it off with Coruba Rum. It has a strong funky smell that takes some getting used to but it also has a good amount of caramel, apple, and cantaloupe aromas which balances the smell. It cannot be drowned by citrus flavors so it is one way to add depth to a cocktail. This is a great cocktail to serve during Thanksgiving or during harvest festivals, more specifically the applejack harvest festival in Nebraska. And yes, we’re definitely hinting that. Might as well really enjoy your apple harvest.

For the apple ginger puree: Make your own spiced rum with just one spice you can buy from the grocery store. All it needs is to shake, sit, and strain and your ordinary dark rum become a delicious spiced rum.

The mixture of star anise, cloves, Chinese cinnamon, Szechuan peppercorns, and fennel seeds gives your dark rum a stronger kick that does not have anything to do with alcohol. A definite must-have for any rum lover.

For the spiced rum: This cocktail gets its shimmery glitter from the Phoenix Tears Rum which for some reason the makers claim to be real tears of a phoenix. Obviously a tongue-in-cheek claim as in similar to the company's other products - Mermaid Tears Vodka and Unicorn Tears Gin Liqueur.

No harm in some fun! This rum is really delicious, even if it's a bit pricey. We bet it barely covers the expense they have to go through just to collect the phoenix tears. For the ginger syrup: 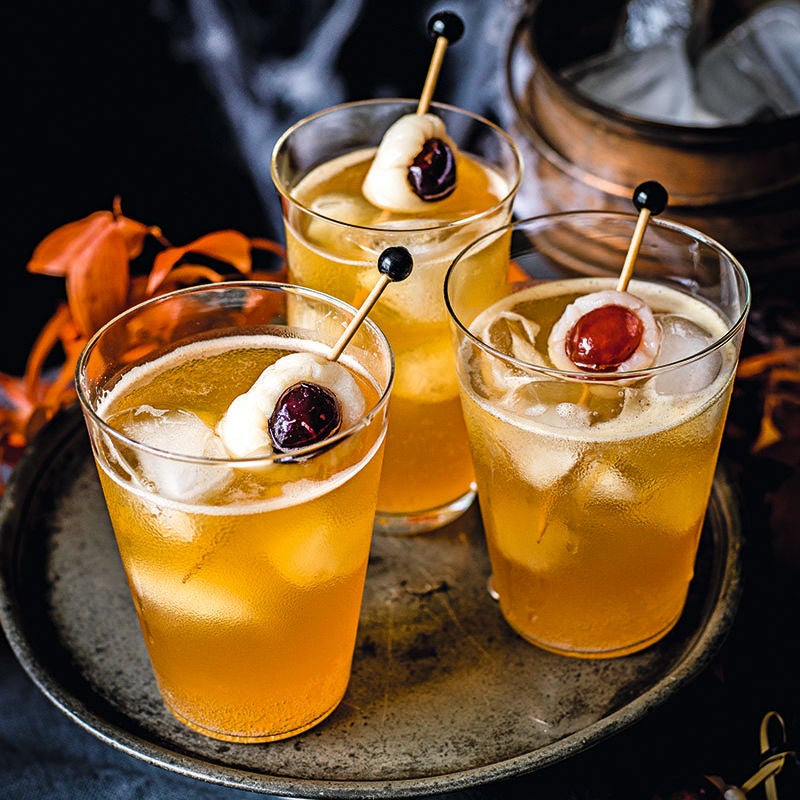 What is Halloween without a Jack-o-Lantern and a pumpkin pie? What is common in these two? Pumpkin! You got it, genius!

Let’s introduce this Halloween version of Dark N Stormy by spicing it up with pumpkin pie spice. Savor the flavors and aroma of cinnamon, nutmeg, cloves, allspice, and ginger with the addition of this spice. 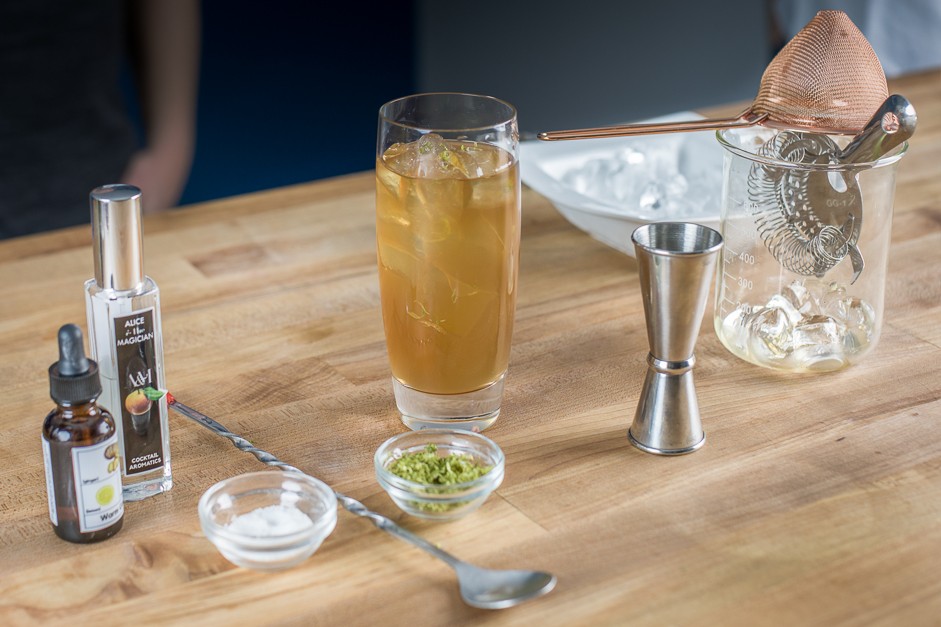 Add more spice and aroma to the classic Dark and Stormy by adding Ancho Reyes, a chili-infused liqueur and ginger elixir. The lactic acid is added to add a tangy zesty flavor. Enjoy this adventurous cocktail. If you feel that the Dark & Stormy is a bit tame for your taste, swap the regular ginger beer with the alcoholic ginger beer - Crabbie’s - and prepare to stumble! Drink with caution. Dark rum goes well with most food except for red meats. Thus, Dark N Stormy pairs well with Asian and fried foods so the choice is endless.

Chicken liver and gizzard in liver sauce is a very rich dish that goes well with the tangy Dark & Stormy.

Pasta and noodles also work well with Dark and Stormy. The oily stir-fry is balanced by the citrusy cocktail.

Treat yourself with some decadently delicious seafood. The buttery sauce and the rich taste of the crabs and shrimp is a very good treat for you.

Finger foods like fish fritters also go well with Dark & Stormy. Eat your heart out and indulge in good conversation with friends at an intimate but fun party.

Want some vegan or vegetarian choice? You can never go wrong with meatless tacos.

The first thing to remember when layering drinks is to add the one with the highest proof or ABV since it is lighter. In the Dark N Stormy, the rum has a higher ABV so it should go last.

The trick to layering drinks is the back of the bar spoon or a cherry. Position the spoon over the top of the ginger beer and slowly pour the rum over it.

2. Why is it called Dark N Stormy?

The name has a few stories behind it. One story is that of an irate sailor who was conned into drinking ginger beer. When he found out, he asked for a stronger liquor and ended up adding a dark rum into the ginger beer.

The resulting cocktail looks like the storm clouds in the night sky. It was said that these kinds of clouds will surely result in death or capsizing of the ships.

Another is of a British navy officer who realized that drinking a mixture of ginger beer and dark rum helped to cure the seasickness of the sailors. Since the seasickness was more pronounced when it is stormy, hence, the name.

3. Where is Dark N Stormy from?

It was said that the Dark and Stormy was invented in Bermuda. Bermuda is reputed to be the shipwreck capital of the world with 300 unidentified shops lying in the bottom of the North Atlantic Ocean.

However, James Gosling made it ashore in 1806 and decided to settle in the islands. During his lifetime on the islands, he distilled rum which was later named Gosling’s Black Seal Rum, owing from the black tar seal that used to seal the champagne bottles recycled by Gosling to bottle his rums.

4. What is the best rum for Dark N Stormy?

5. Is dark rum the same as spiced rum?

No. Dark rum, also known as black rum, is the longest aged rums and is the darkest in color. Spiced rums, on the other hand, aside from the long distillation process are added with spices and caramel colorings. This is sweeter than the dark rum.

The Dark and Stormy is a drink that has been around for decades. It's made with two ingredients: ginger beer and dark rum. The original recipe calls for the use of Barritt's, which is a Jamaican ginger beer brand. However, people have come up with many variations to this popular cocktail over the years!

Let us know which Dark and Story recipe is your go-to-drink. Share your thoughts in the comments.

A Dark N Stormy drink is a highball cocktail made from two ingredients – Gosling's Black Seal Rum and ginger beer. The alcoholic content of the drink, as well as its name, vary regionally. 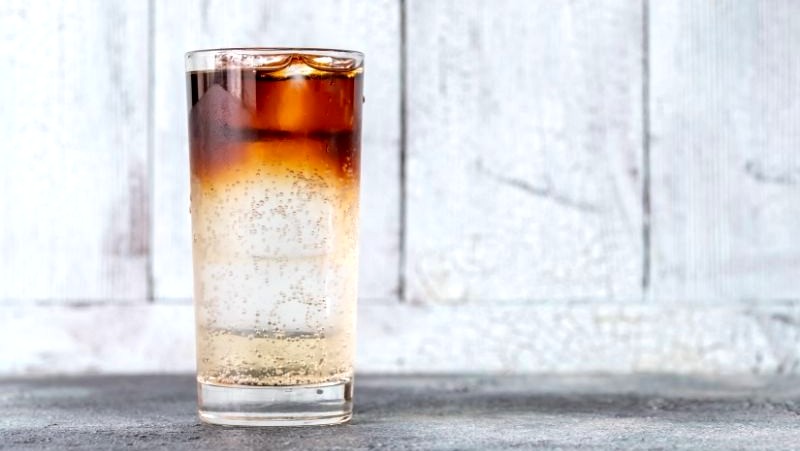