Did You Know? National Mint Julep Day is held every May 30, and Mint Julep Month runs from April 4 to May 4. Share this trivia!

You won’t have to wait for the next Kentucky Derby to have a taste of this cocktail. Try this easy Mint Julep recipe yourself!

Did You Know? Mint Julep is not only a favorite choice but the actual official cocktail of the Kentucky Derby since 1938. Share this trivia!

Bartenders get creative and make their own versions of this Southern cocktail. Here are some twists to the recipe that are exceptionally in-demand.

Having merely three main ingredients, the Mint Julep is not only perfect as a refreshing drink but also convenient choice for a huge event such as the Kentucky Derby.

Standard bar equipment are just what you need to make your own cup of this refreshing drink.

‘Julep’ came from the Persian word ‘gul-ab’ which means ‘rosewater’. The word was used and transferred over different languages and thus landed as ‘julep’ in English. The combination of mint, sugar or simple syrup and Bourbon was originally used by farmers to wake themselves up (like how coffee does!) and start working early in the morning. It became associated with the Kentucky Derby around the 1820s when stunning silver julep cups were awarded to the first placers of the event. The person who made building the Churchill Downs racetrack possible, Meriwether Lewis Clark Jr., introduced the drink in the races in 1875 and it became the Kentucky Derby’s official drink in 1938.

Did You Know? The most expensive Mint Julep is served in a gold-plated cup and is worth $2,500. Share this trivia!

Mint Julep may be the star during Derby season, but its popularity falls once winter kicks in. Nevertheless, the support it receives from its loyal enthusiasts from USA-especially those in Kentucky, Alabama, Louisiana, South Carolina, and Mississippi-, Canada, Thailand, New Zealand, and Australia surely keeps Mint Julep on the menu.

There are several dishes traditionally paired with Mint Julep during Derby season, and among those are bread with Benedictine spread, ham biscuits, bite-sized Bourbon treats, Hot Browns, and, of course, chocolate Derby pie.These are the best to choose from if you are considering having your own Derby party.


This is the "Cherry Julep".. ~ It is international #fathersday today, and wanted to say thank you to my dad, by making him a refreshing cocktail, using one of his favorite scotch, the Glenfiddich 12 year old single malt. Happy fathers day to all dads out there! ~ Ingredients: ▪︎50ml @glenfiddichwhisky 12 year old ▪︎10ml cherry liqueur ▪︎20ml simple syrup (1:1) ▪︎10ml fresh lemon juice ▪︎4-5 pitted cherries ▪︎4-5 mint leaves ~ Glassware #sponsored by @udarely. Use coupon code thegandtonic to receive a 20% discount on any purchases from www.udarely.com ~ In a cocktail shaker, muddle the cherries with the mint leaves, add the rest of the ingredients and shake well with ice. Pour over crushed ice in a julep cup and garnish with mint leaves and fresh cherries. ~ Recipe by @the.g.and.tonic Cocktail and photography by @the.g.and.tonic All rights reserved by @the.g.and.tonic ___________ #fathersday #fathersdaycocktail #sponsored #udarely #cocktailsofinstagram #imbibe #drinkup #drinkstagram #mixologist #mixologyguide #cocktailtime #cocktail #cocktailphotography #cherries #julep #mintjulep

Strongest mint julep ive ever had. But soooo good. pic.twitter.com/BvBWJdudf8

We get commissions for purchases made through links in this post. Updated: October 28, 2019. 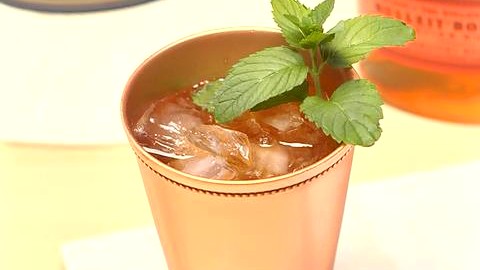 What Is Cachaça? The History Of Brazil’s National Spirit
September 20, 2022

35 Best Gifts For Your Father-In-Law Who Enjoys Alcohol
September 15, 2022

Blanco Vs. Reposado: Which Tequila Makes A Better Margarita?
September 14, 2022

How Your Bar Can Help The Community: 7 Charitable Giving Ideas
September 14, 2022